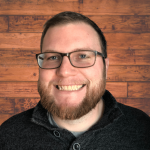 Grand Rapids is known for many great things, not the least of which is the wide variety of Michigan-made beer. One brewery in Beer City USA is The Mitten Brewing Co. Located in the West Grand Neighborhood and in the 2021 Top 50 of brewery production in Michigan, this brewery makes extremely popular beers, including Country Strong, Peanuts and Crackerjack, and the award winning Triple Crown Brown.

With a reputation for high quality beers, I knew I had to check out West Coast Swing Amber Ale (an obvious shout out to West Michigan where the brewery set up home base) when I saw it recently. I mean, this beer won the Gold Medal in 2018’s Great American Beer Festival in the American-style Amber category. It had to be good, right?

On the pour, I saw a rich, almost caramel-like red color. It was clear and easy to see the bubbles that rose from the bottom to create its medium-sized head. Coming off the beer, I got hints of malt balanced with a nuttiness and no hops (often, there’s atl east a little hop aroma in an Amber).

In terms of flavor, West Coast Swing was more bitter than expected with a malty-front flavor, but it wasn’t overwhelming by any means. The smooth mouthfeel with a medium body was lifted by the crisp yet quick carbonation and clean finish. With a malty, caramel (slightly nutty) overall taste, this beer is an excellent example of a quality American-style Amber Ale. I can see why it won the GABF medal!

If you’re a fan of Ambers, you’ve got to try this beer. Even if you’re not, it’s worth a try just to see if this style is something you’d like to explore. Like the rest of The Mitten’s brews, the name is baseball themed, and unlike my own middle school battle record (zero hits, if you were wondering), West Coast Swing hits a home run.

Read + Listen to More About The Mitten Brewing Co

Zach VanderGraaff is a mild-mannered beer lover with a kick-butt wife and three young boys at home (thus, the need for beer!). He loves a good Hefeweizen or a New England IPA but won’t shy away from trying (and over-analyzing) every beer he can get his hands on. A craft beer enthusiast and Michigan native, he also enjoys playing his tuba with German bands during Oktoberfest at different breweries around the state (yes, this means he has real leather lederhosen, and no, you can’t borrow them).