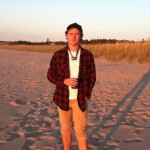 There is something about an American IPA that makes it stand out. Brewed with the ideal blend of citrusy malty hoppyness, an American IPA brings out an elegantly intertwined taste that finishes brewtifully dry. Blackrocks Brewery, born in Marquette in Michigan’s Upper Peninsula, has truly manifested the beauty of an American IPA with 51K.

Is it the water from Lake Superior that makes this brew glorious or is it the way the hops linger so fiercely yet gentle as the beer makes its way down? Is it the fact that proceeds from each beer support the building and sustaining efforts related to recreational trails? I dunno, but whatever it is, this shit slaps hard. It’s a similar feeling to jumping off the actual Blackrocks into the icy depths of Mother Superior any given hungover Sunday morning in Marquette.

Creedence Clearwater Revival (CCR) recorded Cosmo’s Factory in their hometown of San Francisco, CA, in late July of 1970. While most of the country was coming out of acid flashbacks and the summer of love, CCR dug deep into their American rock n roll blues to cultivate this gem of an album. Classics like “Run Through the Jungle” and “Up Around the Bend” shined through. Even a Motown staple “I Heard It Through the Grapevine” built into an eleven-minute jam, which is something even Berry Gordy could have never fathomed.

Now what makes these two an ideal duo? The second the needle drops on Cosmo’s Factory, you’re whacked with “Ramble Tamble,” a fast-paced, psychedelic rock n roll diddley that’s all over the place. Just as is 51K. Is it citrusy? Hoppy? Malty? It’s a whole lot of all of them but it’s right in your face. “Ramble Tamble” is the unsung hero of the album similar to 51K being one of the most overlooked IPAs, especially in Michigan.

With a great IPA, you can plow through the whole six-pack without feeling like your tongue is going to fall off or that your taste buds have run dry. 51K is a shining example of an American IPA. It is a bit heavier with ABV at 7% but does not get boring. Cosmo’s Factory is similar. Hits like “Looking Out My Back Door” and “Who’ll Stop the Rain” accompany you on the second side of the album. When you crack your final beer, “I Heard It Through the Grapevine” begins and it’s a race to see which will finish first.

In the end, these two American heroes are heavy hitters, both with a specular twist on something as simple as beer and rock and roll. The dude abides.

Disclaimer: Chaz purchased this beer for this review.