New Belgium hit the beer scene in a big way. In the past few years it’s become one of the biggest craft breweries  and the eighth overall brewery in the country. Madness! A few years ago my friend from North Carolina told me that Fat Tire was one of his favorite beers and I had barely heard of it. Nowadays you can’t walk through the beer aisle in a grocery store without seeing multiple offerings from New Belgium. Though the flagship beer of the brand is Fat Tire (a solid pick), I decided to give something else a try.

Whizbang has a bright blonde color and tons of happy bubbles. A nice break from the snow that is back for some reason… I like the smell of this beer quite a bit. This might not translate well but it reminds me of a much cheaper beer. Not in a bad way, but in sort of a “pizza and beer” way. Nice and malty but with just a bit of hops. It’s odd that it doesn’t taste that way but I found the smell very inviting.

The taste is also very pleasant. It has a hop punch in the front and then slides off to a smooth blonde finish. The hops aren’t overly aggressive but they add a pleasant spiciness. I very much like the duality of tastes here. The slight dry hop paired with the sweeter finish make for a very refreshing drink. I think this would be a great choice for a warm day for those who would like something slightly heavier than an All Day IPA or an Oberon.

I would say that this beer would be a good choice for summer. Maybe that explains the firework on the front? The flavor is nice, bright, and light but there is a delightful hop tickle for IPA fans to enjoy. Drinkable and fun, don’t hesitate to grab one of these. 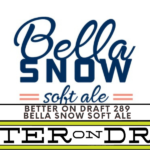